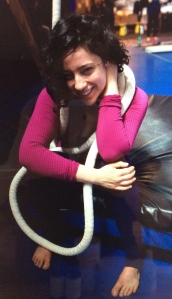 Favorite thing about neighborhood: Within a 8 block radius live more than 10 of my dearest friends which makes it feel like real neighborhood. Also the West Cafe and Cheers Thai see a lot of me.

What did you get funded for? Only Child Aerial Theatre’s ASYLUM

Tell us a bit about your funded project: I am artistic director of an aerial theatre company called Only Child, and ASYLUM is our first full length piece. It is a work of devised theatre using aerial and acrobatic choreography as our primary vocabulary against projected photographs and voiceover to tell the story of five people living in an asylum in the 1970s as the mass closings of American asylums was underway. It began at Circus Warehouse in 2013 and is having it’s first run June 26-28, 2014 at The Muse Brooklyn.

What else are you working on: I just finished doing the aerial choreography for Ripe Time’s The World is Round at BAM in April which was an amazing experience. I’m also working with Circus Now to develop an online resource to raise awareness of safe aerial practices for theatre artists interested in integrating it into their work.

What’s next after ASYLUM is over? Two weeks in Montreal for the Completement Cirque Festival!

What’s inspiring you right now? I have total artist crushes on Codhi Harrell and Laura Stokes of Ricochet, a New Mexico based duo. I also love the work of James and Aureila Thierree, Kneehigh Theatre, Double Edge Theatre and Vesturport.

Anything you’re you totally over? I moved to New York to be an actress and have increasingly found that less and less desirable as a lifestyle for me. Aerial Theatre is where I’m at; and training, performing, creating, directing, producing and choreographing for it where I’m going to be for a long time…

When not making art you are: Meditating in the mornings, coffee with friends, making collage pendants called PopFace, and working as a personal trainer and aerial instructor.

Nicki Miller‘s fascination with aerial sparked in London in 2005 after seeing theatre that seamlessly integrated aerial and acrobatics into its storytelling. After graduating from Syracuse University with an Acting degree, Nicki discovered NYC’s aerial community and began training circus skills. She has performed, taught, produced, curated and choreographed for aerial theatre in NYC since 2010. In 2011, she co-founded aerial theatre company Only Child, which explores aerial acrobatics as a vocabulary for heightened storytelling in theatrical productions. Credit Highlights include: aerial choreography and performance for Rachel Klein Productions (Symphony of Shadows), aerial choreography for Ripe Time (The World is Round) at BAM Fisher, a supporting role in feature film “Art Machine”, Circus Now Community Project “Aerial For Theatres 101.” nickimiller.com