BAC has been a leading source for arts education in Brooklyn schools for over 25 years, connecting teaching artists with K-12 classrooms to provide hands-on learning experiences that foster creativity and imagination. Today, we’re heading to PS 99 in Midwood for a recap of two residencies in Spring 2018. 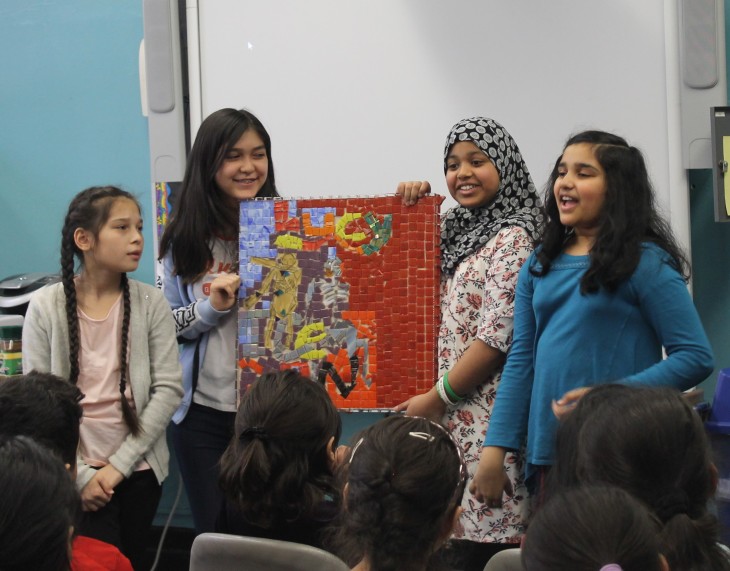 Students present their original mosaic depicting ‘Lucy’ the first human, with their peers.

Sixth-graders at PS 99 took art-making from prehistoric times to the present last school  year in after-school programs that they helped design. For the third year in a row, BAC’s Arts in Education team partnered with the school to create artist residencies that responded to the interests of students and staff.

Each residency responded to the idea of combining art education with STEM (science, technology, engineering, and math) teaching, also known as STEAM. This format brought a wide range of both scientific and artistic concepts to each project.

Mosaics piece together past and present

During her portion of the residency, teaching artist Roseanne Quinn facilitated mosaic-making that incorporated lessons about early human civilization and archaeology. Students worked in small groups to create five mosaics, cutting glass into shapes they then arranged to depict narratives or ideas from the lessons.

Each group showcased their work at the end of the six-week residency, sharing historical facts and details about their process.

Students found the project to be difficult at times but rewarding in the end. “It was challenging and hard, but we did it and I’m proud of it,” said one.

Teaching artist Rute Ventura took over during the second half of the residency at PS 99, continuing to blend science and technology into art lessons. For one project, students made paintings accented by LED lights using characters from the movie Finding Nemo as a common subject. 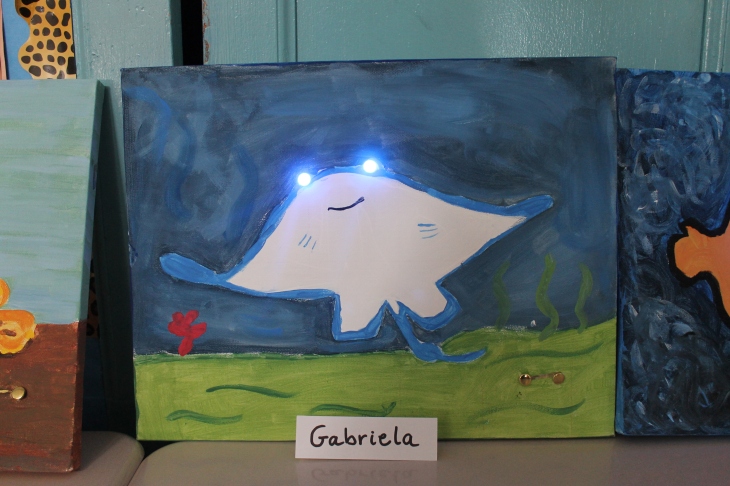 Students used LED lights and handmade circuits to bring their paintings to life.

The students learned how to mix colors, use brushes, and draw objects to scale in addition to operating small circuits to power the LED lights.

It was a busy residency as students completed two more projects using marine life as a theme. In one, they created mechanical scenes using basic levers and rods to animate their images. Some were more light-hearted than others: a surfer riding a wave, talking penguins, and a shark attack were among the scenes. For their final project, the sixth graders built marine sculptures using papier maché.

At BAC, we’re excited to see what more students will create as the new school year gets underway!