Here we interview Abdul Badi, an East New York-based painter, about his work over the last 50 years. 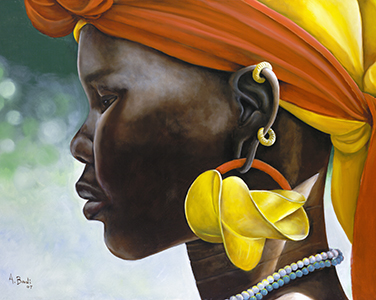 Where are you from? How long have you lived in Brooklyn?
I’m actually born in Washington DC, and wound up in Brooklyn back in 1964. East New York – I’ve been out here since 1988. I’ve lived out here, but I hadn’t met a lot of other artists out here until Catherine opened up Arts East NY, and then I was surprised to see how many other artists actually lived out here. I participated in [the Go Brooklyn Arts Gallery] competition 2 years ago, where they visited everybody’s studio, and in East New York, I was the only artist out here. The other sections – Bed-Stuy, Greenpoint, Williamsburg were chock full of artists, but East New York? Up until then I didn’t really see much on the arts scene. Everything I did was outside of East New York.

How long have you been a practicing artist?
Since I can remember. We all turn towards something, and that was me. Always doodling.

I sold my first piece when I was 14 to a friend of mine’s mother…a piece that I did as an assignment in high school. In elementary school I won one of the school contests, and the prize was free classes at the Brooklyn Museum, so I took some classes there, and then I went on to the High School for Art and Design. Back then I was kind of a knucklehead, getting in trouble and you know that sort of thing. Wound up dropping out, that’s how I wound up in the Marine Corps.

[In the Marines] it was my “MOS” they call it, Mode of service. I went in when I was 17, and illustrating and the drafting is what I specialized in. It was during the Vietnam Era, and by the grace of God, that kept me out of Vietnam. I was in the States for my whole tour. I worked with a unit called Training Support Center, and we created the overhead slides for classrooms – illustrations of tanks, illustrations of weapons, real technical stuff. Every now and then I would get a side job – the generals would have a big party or something, and they’d want a painting of themselves. One time a got a job doing a caricature of all of the generals.

Over the years I’ve worked in the commercial art field, I’ve worked as a sign painter, and I’ve always been a portrait painter.

Were your parents supportive of you becoming an artist?
I was raised in a foster home actually. I never really got to know my real parents. But my foster mother definitely encouraged me. She helped me get into Art and Design High School. I had a lot of encouragement over the years, even back when I was screwing up in high school, the art director, John Clements, I’ll never forget his name. I had got put out of the school, and he got me back in.
Just the mere fact of people appreciating your work, that’s encouragement, it pushes you forward, “Wow,” you know, “I got something here.”

What inspires you artistically?
My subject matter, for the last 30 years I would say, has been Third World peoples, tribal peoples from all over the world. Coming up in my time, the African was portrayed as a Tarzan movie, for instance, or King Kong movie, those type of things. We were portrayed as ugly; everything black was ugly. We were trying to straighten our hair and look like who we weren’t. I guess it was my way of combating that, fighting back against that, because I saw nothing but beauty in that. They still have something that we’re out of touch with. They’re living with nature in harmony, taking just enough. That true human spirit, we all have it, it’s just become so cluttered. Also now those lifestyles are disappearing, but I like to capture as much as I can before they’re gone.

But also love doing surrealistic work. Salvador Dali type work. I like doing work that gives deliberate messages. I believe art is not just for aesthetics; it’s something that can be used to teach, to influence.

Which other artists inspire you?
Oh, so many. Rembrandt, Vermeer, all of them. Just studying the art encyclopedias, I would sit all day, just thumb through the books. That was as real motivation for me as a youngster. When you see other artists’ work, it rejuvenates you. You know sometimes we go through slumps. Sometimes I go for months and I won’t even raise a pencil or a brush or anything. But if you go to a museum or go to an arts show or a festival, and you see an artist’s work that appeals to you, it turns the light back on.

Do you make a living from your art? If not, do you have a “day job” and what is it?
I sell my art any way I can. I’ve been in galleries, some good galleries over the years. I’ve had agents who made commissions off of selling my work. I do festivals like BAM, African Street Festival, all the big festivals in Brooklyn, up and down the East Coast actually, and as far west as Chicago. Once I learned how to get my stuff printed and properly displayed, [the prints] have become my staple in terms of economics. I sell online also, I sell wholesale. In fact I was working on a wholesale order just now, putting together a package for somebody in Denver, Colorado. So my work goes all over the place.

How did you get started presenting your work publicly?
I started back in the 80s showing my work at the Fulton Art Fair. Right across the street from Boys and Girls High School. That was the heyday. Literally 3 million people came through there during the course of the show. It’s kind of died down but we’re still there. I’ve gotten so much out of that show over the years. I would paint just to have new stuff for the next year, because people expect to see something new. It starts on Father’s Day and it’s the last 3 weekends in June, every year, for the past 50 years. I’ve met some beautiful people…it was the beginning of me developing a little following here in Brooklyn. Now I have people that come to these shows just to see me. I’m a low-key guy and that’s like embarrassing for me. They make you feel like a celebrity.